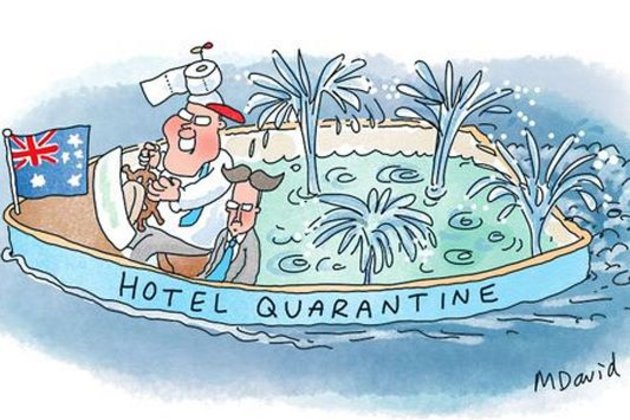 AUSTRALIA IS AN island country without any common border and is geographically distanced from much of the rest of the world. This means that its biological ecosystem is different from those of many other countries. Australia's island status and strict biosecurity protocol have kept it relatively safe from many exotic pests, diseases and pathogens, such as African swine flu, avian influenza, Ebola, Middle East Respiratory Syndrome (MERS), Severe Acute Respiratory Syndrome (SARS) and Zika virus, many of which are common and native to other parts of the world. Historically, Australia maintained this opportunity and protocols not only to protect its human population but also to protect its livestock, pets and productive plants.

Following the outbreak of COVID-19 disease and identification of such disease cases in Australia, Biosecurity (Human Biosecurity Emergency) (Human Coronavirus with Pandemic Potential) Declaration 2020 was enacted. As part of both elimination and suppression strategy, Australia closed its international borders, initially went for strict lockdowns, mandated masks at various times and suggested social distancing. Businesses were given strict guidelines and protocols to be COVID-19 safe.

The Federal Government has taken the necessary steps to bring back all the stranded Australians overseas due to border closures subject to required quarantine. The initial evacuation flights from the epicentre (Wuhan, China) arrived at Christmas Island for quarantine. Later, the National Cabinet agreed that Australians returning from overseas would be forced into quarantine for two weeks at hotels in the cities where they arrive.

At some stage, Australia was very close to eliminating the virus and had given a sense of normal life to people. However, the hotel quarantine system created some disruptions.

Australia suffered from having no pandemic plan

Damage done by the COVID-19 pandemic was worsened in Australia due to a lack of preparation and effective management.

Hotel quarantine was not a permanent solution

Due to the contagious and continuously mutating nature of the current virus, the escape of the virus from the hotel quarantine facility led to many lockdowns and Australia could not get the full benefit from its island status. It has been identified that since November 2020, 17 virus leaks from hotel quarantine have occurred: seven in NSW, three each in Victoria and Queensland and two each in South Australia and Western Australia. Authorities in many instances could not clearly identify the chain of transmission from infected hotel quarantine guests to workers in cities across Australia.

The need for purpose-built quarantine facilities

Despite the rollout of vaccines around the world, the COVID-19-free world may not be sooner than later. We even may have to accept the challenge to live with the disease forever. Furthermore, Australia may have been defeated by its own success as it is behind the vaccine race. Australians will have to live with the virus for a few more years or at least until the full population will be vaccinated.

Therefore, there is an increased call for purpose-built quarantine facilities throughout the country to reduce the likelihood of COVID-19 escape. Human quarantine in a hotel is also a challenge of mental health issues for those who stay in a confinement for 14 days. Australia's current Howard Springs facility in Darwin with free-standing accommodation is an example that is away from major population centres.

Wren's Week: Morrison's handling of COVID-19 a series of failures

Among its many failures, the Morrison Government's handling of the COVID-19 pandemic has been an absolute disgrace.

Following the second wave in Victoria, it was also exploring a new quarantine model for the long term. Following the initial plan in February 2020, it unfolded the details of such a purpose-built facility in April 2020. While some states, such as Tasmania, are not interested in such a quarantine facility, NSW also joined such a race to build a hub like the Howard Springs facility. While hotel quarantine is to be continued for incoming Australians, South Australia has approved a plan to bring back Adelaide's international students by allowing them to quarantine at Parafield Airport in the city's north.

Although Prime Minister Scott Morrison primarily defended building purpose-built facilities for hotel quarantine, reiterating the improvement of the capacity of states and territories to contain the virus from hotel quarantine and investment in the current Howard Springs facility, the Victorian Government could reach a deal with the Commonwealth over its $200 million new quarantine hub for a 500-bed quarantine facility north of Melbourne.

Why Victoria, why not Queensland?

New South Wales, which has taken in 44 per cent of international arrivals since the start of the pandemic, also joins the race for a purpose-built quarantine facility. However, like the success of Australia to contain the virus, NSW may also be the victim of its own success of the hotel quarantine system after Scott Morrison described it as the gold standard.

Although Scott Morrison ruled out this earliest Toowoomba proposal at an early stage, Queensland is next to take the lead. The Wagner Group, which built the Welcamp Airport within 19 months, proposed it may have the ability to build the quarantine facility within five to six weeks.

The COVID-19 response in Australia has been one of the most effective in the world. But the system is far from perfect.

While the Queensland Premier says the Toowoomba quarantine hub is not dead, Queensland needs to focus on the issues raised by the Prime Minister. Queensland has lost the proposal on the ground that Toowoomba is too far from a major capital city airport and from any major state hospital. It appears that the Welcamp Airport could not create an appeal to the greater community and failed to connect with wider Australia even before the current pandemic.

Some very infrequent flights are run by Airnorth connecting Melbourne. Some regular non-direct flights are run by Qantas connecting Sydney. However, these flight prices do not seem to be sustainable. There is no public transport or sustainable private transport from the airport that at least can connect to the Toowoomba city centre. The parking fees seem to be excessive - $15 a day seems to be very high compared to other major airport parking where some other parking options are available.

Like Melbourne's Avalon Airport, the Welcamp Airport's ability to alleviate the distance barrier and to connect to wider Australia at a sustainable price may not only create an appeal for the regional quarantine hub in Toowoomba but also can create many benefits to the wider community in this area, for example to the University of Southern Queensland.

Dr Afzalur Rashid, PhD, CPA is Senior Lecturer in Accounting at the University of Southern Queensland, Toowoomba where he is actively involved in teaching and research.