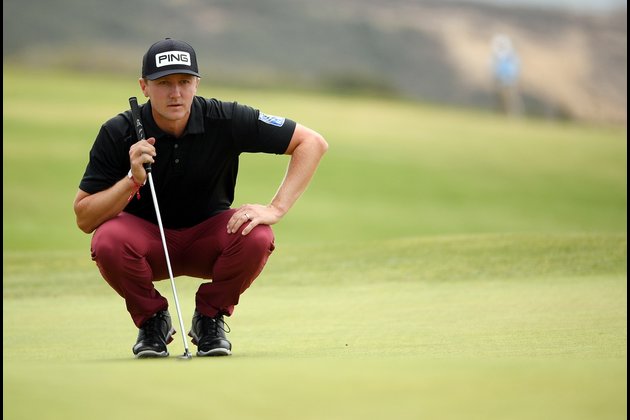 Russell Henley has company atop the leaderboard through three rounds of the U.S. Open and there's plenty of contenders with star power in pursuit.

They're all at 5-under-par 208 going into Sunday's final round. Hughes and Oosthuizen will play in the last pairing.

Defending champion Bryson DeChambeau and Irishman Rory McIlroy are lurking just two shots back in a tie for fourth place.

Henley needed a par-saving putt on the last hole to remain a co-leader.

Hughes made his move with an eagle on the par-5 13th hole -- using a putt from about 60 feet -- and then was steady until a birdie on the last hole.

"I feel like I've been a pretty strong performer on the PGA Tour for the last five years, but U.S. Open is a different animal," Hughes said.

Yet he might have gained another degree of confidence by sinking that eagle putt.

"The charge that goes through your body when the ball goes in the hole and the crowd erupts is why we play," Hughes said.

Oosthuizen posted an eagle on the par-5 18th hole, making a 52-foot putt for a quick climb to the front. He was 2 over for the day through 12 holes before making a move.

Henley has called the tournament difficult, but he describes it as a fair challenge. He also has held a different perspective as a leader for much of the time.

Still, he needed some good fortune. On the par-3 11th, his tee shot went into a bunker. His response was sinking the next shot for a birdie.

DeChambeau shot 68 in the third round and McIlroy had 67.

DeChambeau was without a bogey in the round. He seems to have bided his time throughout the week.

McIlroy was bogey-free other than the par-4 15th hole on his way to his lowest third-round score in U.S. Open competition.

"Some mental fortitude," said McIlroy, the 2011 champion. "It's the most demanding golf tournament in the world mentally. You have to keep your wits about yourself and really stay in the present. Even when I was going well, I reminded myself of that."

Dustin Johnson, who holds the No. 1 spot in the world golf rankings, shot 68 to move to 1 under for the tournament and shares ninth place with Collin Morikawa (70), Kevin Streelman (72), Xander Schauffele (72) and South African Christiaan Bezuidenhout (70).

Second-round co-leader Richard Bland of England played the last eight holes in 5 over on his way to birdie-less 77. He's 1 over and tied for 21st place.

Besides McIlroy, the only better score turned in Saturday was a 67 by England's Paul Casey. England's Ian Poulter had 68, and that duo is tied for 14th at even-par.

Also at even are Italy's Francesco Molinari (69) and South Korea's Sungjae Im (69).

There were only 17 under-par scores Saturday out of the 71 golfers who made the cut.