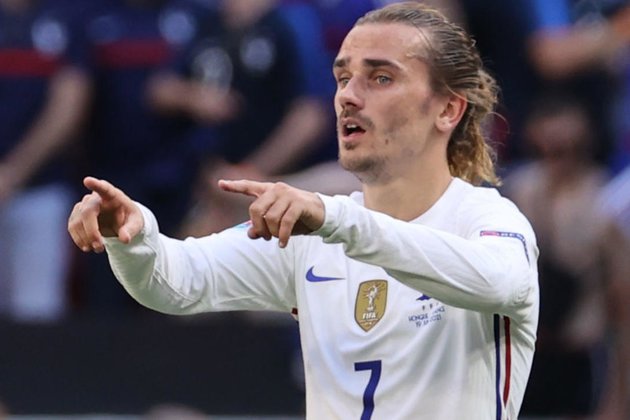 Griezmann salvages a point for France against Hungary at Euro 2020

Hungary held world champions France to a 1-1 draw on Saturday to maintain their hopes of progress to the knockout stages of Euro 2020.

Following their 3-0 defeat to Portugal in their opening Group F game on 15 June, Hungary knew they required at least a point to continue their interest in the tournament.

And they started strongly in front of a rowdy Puskas Arena in Budapest. But France gradually began to dominate possession.

Kylian Mbappe had the first chance of the game. But the Paris Saint-Germain striker headed wide from Lucas Digne's cross from the left.

Karim Benzema was the next to miss a glorious opportunity. Antoine Griezmann lofted a pass into the penalty area, Mbappe chested down and his slick back-heeled flick eliminated Endre Botka and Willi Orban. But the advancing Benzema could only stab his shot wide of Hungary goalkeeper Peter Gulacsi.

Mbappe went close soon after following a tricksy run through the Hungary rearguard.

But despite being under the cosh, Hungary broke the deadlock on the cusp of half-time.

Attila Fiola and Roland Sallai combined in midfield with a neat one-two and Fiola powered on another 30 metres to slot the ball past France goalkeeper Hugo Lloris to the delight of the partisans.

Emerging from the half-time break, France boss Didier Deschamps told TF1 he had urged his players to stay calm and maintain their rhythm.

His charges were as good as his words and immediately tore at the Hungarian defence.

Deschamps sent on striker Ousmane Dembele for defensive midfielder Adrien Rabiot and the Barcelona forward's first action was a shot which hit the post. He also twice gave the ball away when his team was in a good position.

The leveller in the 66th minute was rather old school. Lloris hoofed the ball upfield and as Adam Nagy and Loic Nego tried to deal with the bounce, Mbappe muscled in to gain possession.

His instant centre came off Orban into the path of Griezmann who swept home.

Despite searching for the winner, Hungary held out for their first point of the competition.

The draw left France with four points and provisional lead of the pool ahead of Portugal's game against Germany in Munich on Saturday night.